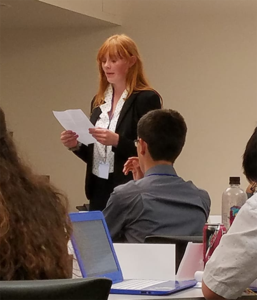 The Speech and Debate team at the high school headed to Alamosa to participate in the first annual Southern Colorado Model UN event at Adams University.

Nine debaters researched, wrote papers and delivered speeches (both prepared and impromptu) on genocide and on women's right to equal access to technology in developing countries.

These nine teens played the role of countries they were assigned in delivering speeches in moderated and un-moderated discussions. They drafted formal resolutions with delegates representing other member nations. The Adams State Model UN team hosted the event providing the instruction and support for the event itself. They created a safe and welcoming environment where our debaters thrived in their ability to work collaboratively with teens from other towns in listening to each other's perspectives and concerns in creatively solving some of the world's biggest problems.

This was the first of many annual Model UN experiences at Adams State University for our Speech and Debate Team.  We are fortunate that Archuleta School District continues to support our students as they grow and that Adams State Model UN offered such a spectacular event for our students. Every member on the team wrote a position paper and delivered multiple speeches over the two day event. Pirate debaters are working hard and enjoying noticeable growth this season. What is Model UN?

According to Wikipedia: "Model United Nations, also known as Model UN or MUN, is an educational simulation and/or academic activity in which students can learn about diplomacy, international relations, and the United Nations. MUN involves and teaches participants speaking, debating, and writing skills, in addition to critical thinking, teamwork, and leadership abilities.Usually an extracurricular activity, some schools also offer Model UN as a class. It is meant to engage students and allow them to develop deeper understanding into current world issues." Read more at https://en.wikipedia.org/wiki/Model_United_Nations