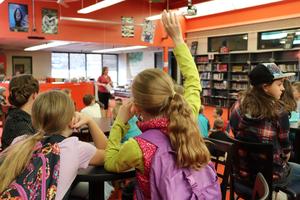 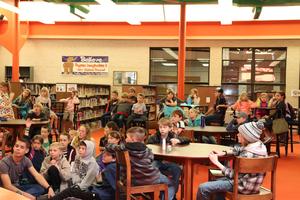 Pagosa Family School students started their PFS day off with an assembly in the Middle School library as Cheryl Bowdridge discussed with them the importance of adult role models and explained the Adult Role Model Campaign.
The Adult Role Model Campaign is brought to our community of schools by a partnership between San Juan Basin Health, Rise Above Violence and Archuleta School District. Going on year three of the Adult Role Model Campaign, ASD schools take time to have Mrs. Bowdridge visit their schools to discuss with students ‘What is an adult role model?’ and to have a discussion on what that may look like for them. She then hands out nomination forms for each student that wishes to participate, to take home and to nominate positive adult role models in their lives.
Cheryl explains that “students who can identify that they have adult role models in their lives have a more positive outlook on life and will have more positive responses to life events.”
Nomination forms have been sent home and will be collected the week after spring break. After collecting all of the forms, a panel of community members will read the forms and will narrow the selection down to the top 8 nominees. Each year, one finalist is chosen to be nominated as the community winner. All nominees get recognized in the newspaper. The top 8, along with the winner, are highlighted and given awards at a special banquet in May.
Thank you San Juan Basin Health, Rise Above Violence, and Archuleta School District for supporting the positive developmental assets for all youth in our community!
All nomination forms are being collected through the end of this week.
Print